on the murders of two Kennett Square policemen

Lafayette and a ghost train appearance is on his schedule

The book marks the 50th anniversary of the two policemen being ambushed on November 15, 1972, outside the Kennett Square police station.

“The cold-blooded murders marked the end of innocence in small town America,” Mowday said. “If law enforcement officers were attacked in a town such as Kennett Square, then no place was safe.”

Mowday interviewed family members of both officers and many of the investigators of the case for his book. Besides consulting court records and newspaper accounts, the author talked to Kennett Square residents. He also corresponded with the criminal convicted of the crimes.

For signed copies of the book, contact Mowday at mowday@mowday.com. He has written more than 20 books on history, true crime, sports and business. For all of his books, see Mowday’s website at www.mowday.com.

“The book on the murders of the policeman is the final work of a trilogy on the Johnston gang, Chester County’s most notorious criminals,” Mowday said. As a newspaper reporter, Mowday covered the gang’s criminal cases. “The Johnston gang was responsible for multiple murders. They were a gang of thieves that stole construction equipment, tractors, Corvettes and antiques.” Mowday’s other works on the Johnstons are Jailing the Johnston Gang: Bringing Serial Murderers to Justice and Stealing Wyeth.

Mowday’s first talk on the book will be Sunday, October 9 at 1:00 p.m. at the Kennett Brewing Company, 109 South Broad Street, Kennett Square. On October 25, Mowday will talk about his new book before the Chester County Antique Car Club at 7:30 p.m. in West Chester.

In November, Mowday will appear at the General Warren Inne, Malvern, on November 2 for a dinner discussion. Reservations are need. Reservations will also be required for his two dinner talks on November 9 at the Chadds Ford JunXion Café. The Oxford Area Historical Society is hosting a talk on the slayings of officers Davis and Posey on November 16.

The Johnston gang is the subject of Mowday’s talk on October 8 at 1:00 p.m. at the Coatesville Library. Also that day, he will sign books at the Humphrey Marshall Day celebration in Marshallton. Mowday has two Stealing Wyeth talks scheduled, on October 11 at the Church of the Saviour in Wayne and October 28 at the Hershey’s Mill Golf Club. The Hershey Mill’s event is sold out.

Mowday’s Lafayette at Brandywine: The Making of an American Hero book is the subject of the author’s first talk in October. He will be appearing at the Rising Sun branch of the Cecil County Library at 6:00 p.m. on October 5.

“Lafayette is such an important person in our nation’s history,” Mowday said. “He proved himself on the Brandywine battlefield on September 11, 1777. He spilled his blood for our independence. Lafayette and Brandywine are linked to freedom.”  Barricade Publishing released the Lafayette book in October 2021.

On October 15, Mowday will give two talks on Lafayette. He will speak at a Daughters of the American Revolution luncheon at the Radley Run Country Club and then at a MENSA meeting at Baldwin’s Book Barn at 4:00 p.m.

Mowday will join the Yorktown, Virginia, celebration and sign books at the American Revolution Museum from 1:00 p.m. to 3:00 p.m. Lafayette was one of the American commanders responsible for the surrender of British General Charles Cornwallis at Yorktown.

Author Mowday’s other two October talks will be at Bayard Rustin High School on October 26 and before the Masons in Philadelphia on October 26.

During the month, Mowday will speak at a book club in Mount Joy and be interviewed for a radio show and also a podcast on the Johnstons for a North Carolina station. He will join author Charlene Briggs for a presentation at Ware Presbyterian, Oxford on October 27 on issues facing veterans and the public caused by combat.

Mowday will conclude his extremely busy month by taking part in the WEGO Rotary’s Ghost Train ride on October 28 at 6 p.m. at the train station in West Chester. “This is a benefit event,” Mowday commented. “I’m not telling ghost stories. I’m recalling true encounters I’ve had at Gettysburg and other places.” 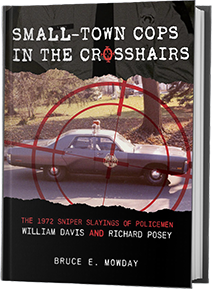